Imagine the power in your office building goes out and you hear a fire alarm. All you know is that you must leave the building as soon as possible. Luckily your office space is located next to a window, so you can easily find your way to the elevator. You see your colleagues frantically pressing the down button to no avail before deciding to head to the emergency staircase.

After opening the door, you immediately realize an issue; the staircase is submerged in darkness and is about to be flooded with office workers trying to leave the building.

Ecoglo® developed our photoluminescent egress products for exactly this kind of situation. How are workers supposed to know how to exit a building in an emergency? Sure, your boss might have briefly mentioned the emergency route when you first started, but you probably filed that information away in the “Probably Won’t Ever Need It” folder of your brain. You use the elevator and main commuter pathways every day, so how are you supposed to know how to use your emergency pathways when the time comes? 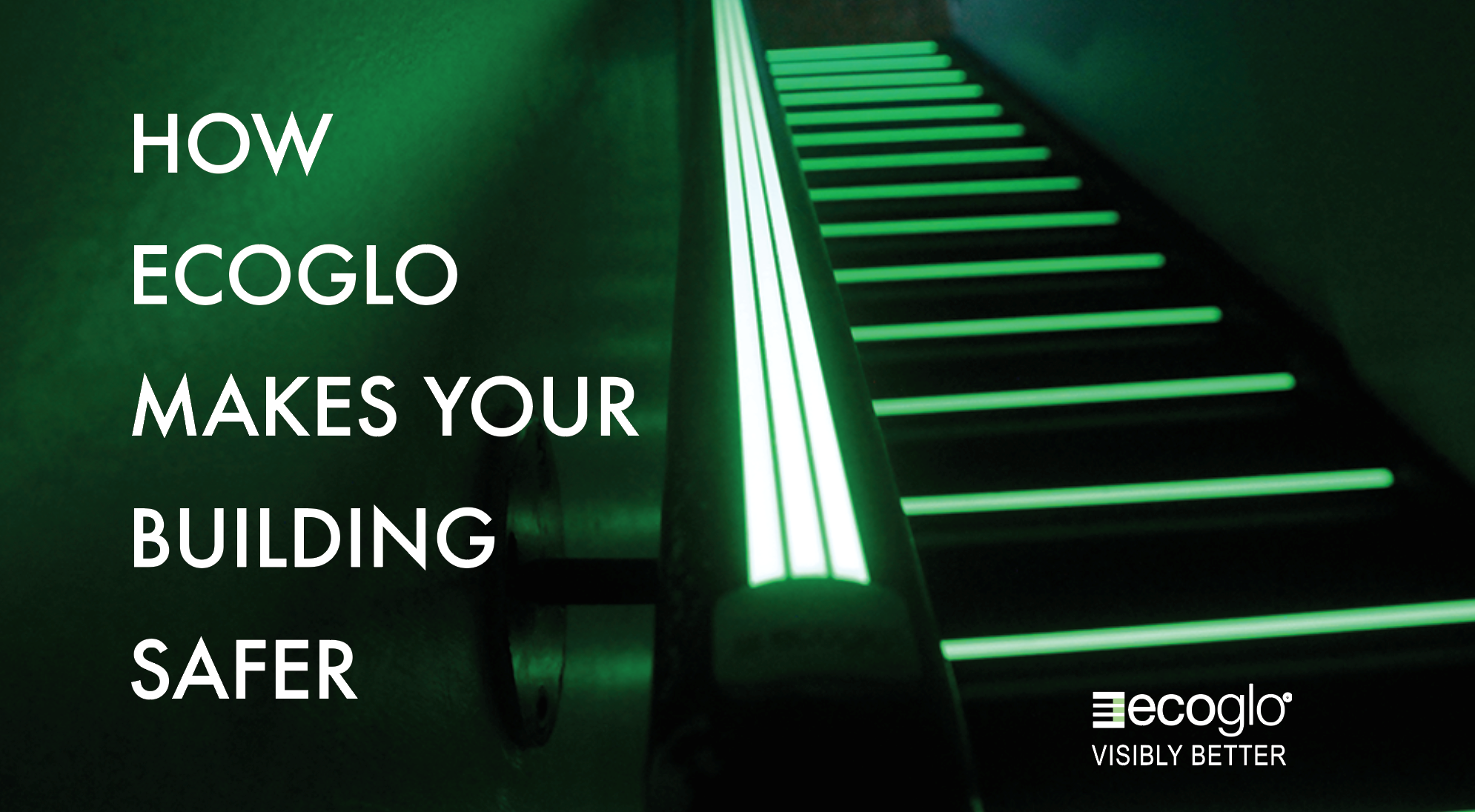 Luckily, our team at Ecoglo® uses a patented process to produce a range of luminescent pathfinding solutions that allows office workers to safely and quickly exit buildings when evacuation is required. And unlike those electrical or battery lighting systems that are prone to failure in emergency situations, Ecoglo® photoluminescent technology will brightly glow in the dark for hours – giving your patrons plenty of time to confidently and safely exit.

“Should a building’s back-up generator fail, Ecoglo will still function without a problem,” said Anil Parmachand, National Product Manager of Ecoglo. “Ecoglo is there for you when everything else fails, providing your building with a safe, efficient luminescent egress signage that will never burn out. All you need to do is make sure that the lights near your photoluminescent technology are turned on when the building is occupied so that they are charged and ready to go.”

Ecoglo’s Photoluminescent egress markings glow brightly for hours on end, ensuring a safe evacuation, no matter how long it takes. You won’t have to maintain or replace Ecoglo luminous egress products for years to come.

Ecoglo’s Photoluminescent egress markings glow brightly for hours on end, ensuring a safe evacuation, no matter how long it takes. You won’t have to maintain or replace Ecoglo luminous egress products for years to come..

Ecoglo’s Photoluminescent egress markings glow brightly for hours on end, ensuring a safe evacuation, no matter how long it takes. You won’t have to maintain or replace Ecoglo luminous egress products for years to come.

Ecoglo® illuminated egress signage cannot fail due to its innovative, energy-saving design. Our patented process bakes the photoluminescent powder into every product’s material to achieve a high level of durability, abrasion and cleaning resistance, UV resistance, and weather resistance.

This photoluminescent powder is then charged by the light available in its place of installation. It takes approximately 10 minutes of sunlight or 60 minutes of a 200-lux fluorescent light to fully charge Ecoglo® luminescent technology, which would then be visible in darkness for over 11 hours. In the event of an emergency, a facility’s egress signage would likely be charging for hours if not days.

Better yet, Ecoglo® products will guide your patrons from the beginning of their exit pathway to the very end. Our Self-Luminous Directional Exit Signs safely alert patrons to their nearest exit. These illuminated exit signs cut through darkness like a knife, so they are visible to everyone in the area.

You may be thinking, these products seem so logical, why aren’t they mandatory?

Actually, photoluminescent systems are mandatory in many municipalities around the world, and their requirement continues to be added to building codes due to their clear functionality and safety. For example, all office buildings in New York over 75 feet high must now feature photoluminescent markings in all exit pathways. This came about due to a task force into building safety after the 2001 World Trade Center attack, as the stairwells’ emergency lighting failed at that crucial and tragic time.

The ICC then followed New York’s lead with a new code being added to Chapter 10, Means of Egress, in their 2007 International Building Code Supplement – which requires non-electrical egress markings in all new non-residential buildings that have a height of 75-feet or higher.

Ecoglo® photoluminescent egress products are cost-effective, provide all-light visibility, and will bring any building up to code compliance. You can never plan for when an emergency may happen, but you can make sure Ecoglo® is installed so that every patron in your building gets out safe. Plan for the worst, so when the worst happens no one gets hurt.