A Visibly Better Solution for you Building

As a critical part of every building, emergency exit signs play an important role in keeping patrons, occupants and visitors alike, safe from harm. Whether simply trying to find the way out to the parking lot or navigating towards the exit discharge in an emergency, when used correctly, exit signs can be a big help to all.

For exit signs to successfully fulfill their role in human safety, they must always remain visible, in all lighting conditions and in all scenarios. Unfortunately, however, this is where many emergency exit lights may fail. 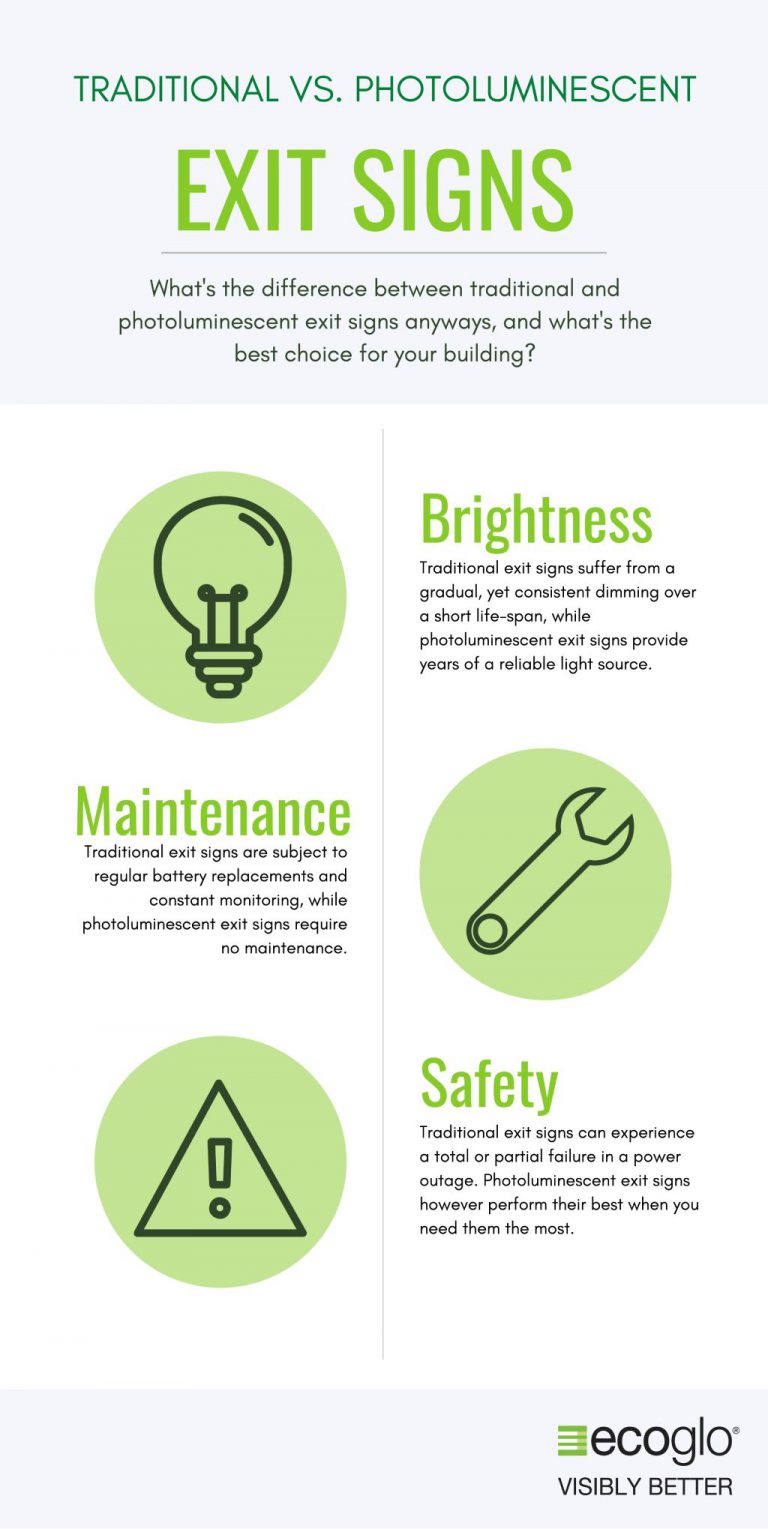 Many manufacturers of illuminated LED exit signs claim a lamp life of 50,000 or even 100,000 hours, an equivalent of 5-11 years, respectively. It is important to note however, this claim is limited to only the LED component, not the associated circuity, housing, or driver. Consequently, the exit sign could reach the end of its lifecycle before the LED component does, rendering the exit sign ineffective.

Although it is uncommon for LED light sources to fail all at once, it does happen. Although what is more likely is a gradual loss of brightness over time. What the claimed life span of 50,000 hours more accurately means is the LED is likely to exhibit a gradual drop in brightness every year until, after approximately 50,000 hours it ceases to preform as rated. Moreover, some LED life expectancies are based on the time taken for the product to reach just 30% of initial brightness, which can result in an unrealistic life expectancy claims. This level of brightness may not be accepted by local building and fire codes, rendering your exit sign non-compliant and creating a potentially dangerous situation.

As a world leader in luminous egress path markings, ecoglo® has perfected the high-temperature curing manufacturing process that not only enhances product durability but produces extremely long-lasting luminescence. After what is equivalent to 30 years of exposure, the loss of luminescence in ecoglo® products is so minimal it cannot be detected by the human eye. After only 5 minutes of exposure in a well-lit area, ecoglo® products can provide hours of emergency lighting.

Unlike traditional, high mounted exit signs, photoluminescent signs do not cast any shadows, creating a safer, easily visible exit pathway. Additionally, the light emitted from self-luminous exit signs cuts through smoke so patrons can easily follow the egress path in any condition.

Many traditional exit signs rely on nickel-cadmium (Ni-Cad) batteries to operate. Under the consistent use required by emergency exit signs, the lifespan of these batteries averages around 2 years. The cost of battery replacements can add up quickly!

Photoluminescent emergency lighting products have no batteries or wiring, which means no testing or replacements. Inspections of luminous egress products can easily be conducted by building or facility managers, focusing on ensuring the products have not become covered or obstructed.

The photoluminescent egress lighting products from ecoglo® do not require any regular maintenance to continue operating at their highest performance levels. An occasional light dusting is all that is needed!

Battery powered or electric emergency lighting backup systems are more than likely to experience partial or even total failure, as well as having a limited operating time.

The photoluminescent egress lighting products from ecoglo® do not require any regular maintenance to continue operating at their highest performance levels. An occasional light dusting is all that is needed!

Unlike tritium exit signs, ecoglo® products are completely non-toxic and non-radioactive, making them the safer choice for your building and the greener choice for the environment.

Ecoglo® products preform their best when all else fails! After gaining a charge from exposure to a natural or artificial light source, Ecoglo®’s photoluminescent lighting products provide a continuous, bright glow for hours after the power has failed.

Shining Above the Rest

With the use of photoluminescent exit signs, the frustrations of traditional emergency exit lighting can be avoided! It is critical to provide patrons, occupants and visitors alike with a clearly marked exit path, for both everyday use and emergencies. The peace of mind, and savings, that come with photoluminescent exit signs makes them the visibly better choice for your business.

Ecoglo offers a range of luminous egress path markings and photoluminescent exit signs to make it easier than ever to outfit the egress path in your building.